The following work was produced by an art class run by Richard Gentle between 2015 and 2016. One of the projects, for each of two groups, was to visit St Oswald’s Church, Methley. 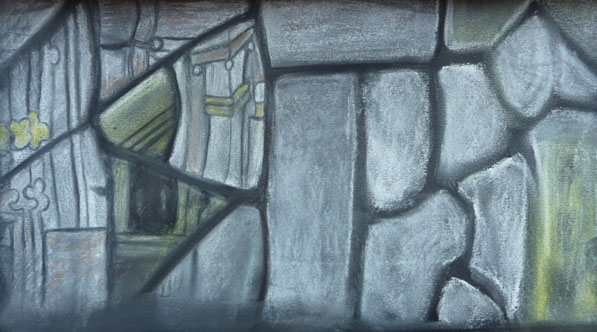 Caroline took a small section of one stained glass window and enlarged it to reveal a further architectural image depicted within the glass. 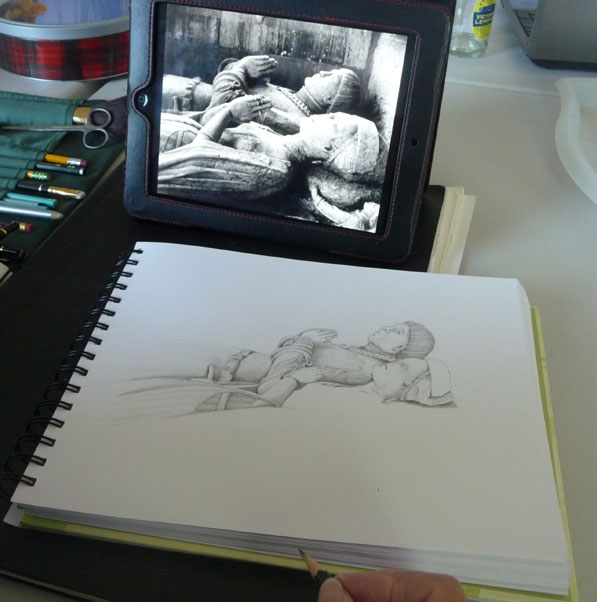 Although perhaps not easily seen in this photo of Denise’s drawing, her fine pencil work creates a visual feel of a marble finish – smoother in appearance than the original tomb sculptures. There is a slightly tongue-in-cheek, comical feel to this when examined closely, since Denise has the man’s eye, perhaps nervously, checking on his somewhat moribund partner. 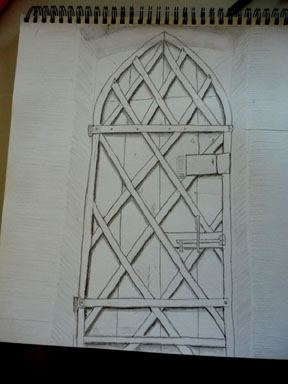 Kathy successfully captured both the simplicity and complexity of this old door and with minimal use of her pencil has managed to separate the wood, metal and stone in a recognisable way. And don’t be fooled by the apparent ease with which she has mastered the proportions of the pattern – for even with a supporting photo to enable her to work on her previous sketch – this is not an easy achievement. 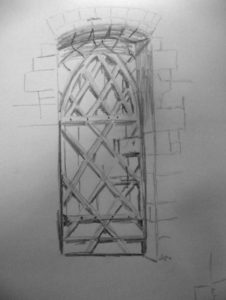 I was surprised Kathy had another go at drawing this door (right), after the brilliant job she made of it on a previous visit. 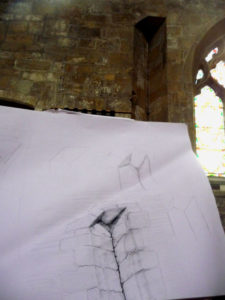 However, it wasn’t long before she decided to have a go at what she liked to call her ‘nemesis’ – a rather incongruous , angled recess in the wall (left) – that has caused her some problems in rendering it so that it dips inwards. 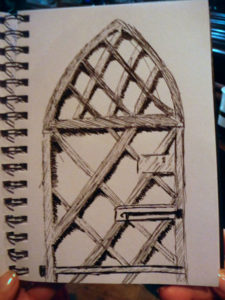 I think Mags was as surprised as I was to see how well this drawing turned out (left). Although the strong texture of the shading makes it a bit furry, Mags’ observation and technique has captured the quality of the door. I also like the three-dimensional rendering of the door catch, which stands out convincingly, from the frame.

Stan produced these brilliant ink pen sketches (below), complete with notation. The first two have a nice purity of line coupled with a keen observation of key features. Stan has captured both the crisp cut and shaped stonework above the face and the height and heavy bulk of the pulpit.

The drawing of the graveyard (below right) has an almost newspaper cartoon-like quality about it, but perfectly captures the atmosphere of aged stonework being gradually eroded and overtaken by nature. 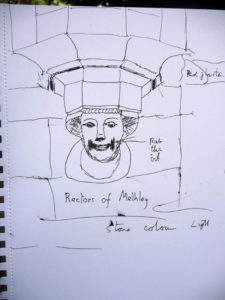 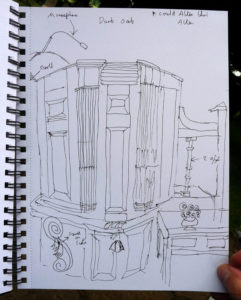 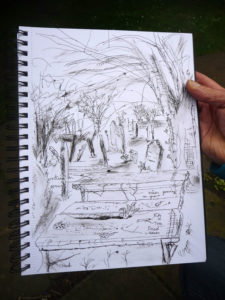 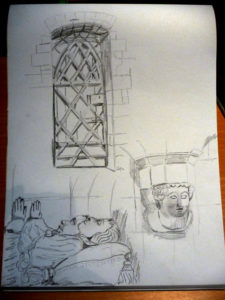 I particularly like Elizabeth’s shading on the door (left), the shaping of the stonework and head, and the treatment of the pillow, and line quality of the figure’s face and hair in the foreground. 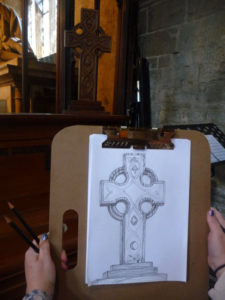 Tracy produced a nice crisp drawing of this cross (right) from a low angle, looking upwards. Although the circle has gone a bit square and artistic licence has placed a hole in the lower area and the length is a little short, the drawing nevertheless conveys Tracy’s ability to observe with clarity, the detail she likes to put into her drawings. I particularly like the main cross shape, where Tracy has captured its solidity and pattern. 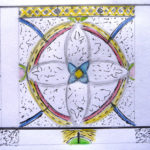 Mags then had a go at a section of stained glass. Initially, there was a temptation to attempt the whole window, but its complexity, coupled with the time available, was too ambitious. Mags commented that what had first appeared to be little crosses were, on closer inspection, fleur-de-lis. I suggested that implying detail might be easier in some areas than trying to reproduce it with exactness and Mag’s use of pen in the areas of clear glass works well.

I have observed that drawing in St Oswald’s Church often lulled one into a false sense of thinking many things would be fairly simple to draw. However, I’m sure I wasn’t the only one who started a drawing, only to get lost in the complexity and number of changing lines and patterns in almost every aspect of its decorative architecture and sculpted forms.

Grateful thanks to Peter Bloodworth (Church Warden) for arranging access to the church and also to Sylvia for coming over to lock up after we finished.